Are you a B.B. King fan? This cruise ship is for you 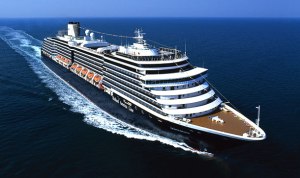 The first B.B. King Blues Club at sea has debuted on a Holland America ship.

The Seattle-based line says it has transformed the Queen’s Lounge on the 2,104-passenger Eurodam into a B.B. King Blues Club for live performances five nights a week through June 20.

Members of the B.B. King Blues Club Band are playing the venue, which has been redecorated with portraits of King and other music legends.

Holland America says a stage similar to ones found at Memphis blues clubs was added to the lounge, and the wait staff has begun serving the specialty cocktails that are offered at B.B. King Blues Clubs on land.

In addition, the B.B. King Blues Club Band is playing the Eurodam’s main theater one night a week in a live stage show directed by Marion Caffey, producer of Amateur Night at the Apollo. Dubbed Memphis Sound, the 45-minute performance incorporates video projection to tell the story of the blues.

This entry was posted on Friday, March 8th, 2013 at 11:54 AM and is filed under Best Hotels, Cruises, Travel & Money. You can follow any responses to this entry through the RSS 2.0 feed. Responses are currently closed, but you can trackback from your own site.