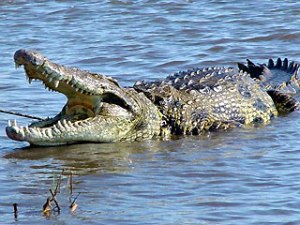 The crocodile ranch lies almost hidden and largely forgotten behind the  airport in Ethiopia’s southern town of Arba Minch.

The country’s first crocodile farm, it was built by an enterprising  government official in the 1980s to generate foreign currency in one of Africa’s  poorest countries, where people mainly live from subsistence farming.

But the ranch has since fallen into disrepair, its decline a symbol of the  challenges facing Ethiopia as it seeks to lure more tourists to its mountainous  ranges and seemingly endless plains.

At the end of a narrow path, the crocodiles laze in deep pools, their eyes  glittering as they stare down nervous visitors. Separated according to age, the  crocodiles feast on horse meat twice a week.

Thousands of the reptiles are reared in these cement-floored pools, but the  paths leading to the ranch’s star attraction are covered with weeds and hidden  in the dense overgrowth.

Metal fences meant to protect visitors from the crocodiles’ jaws are rusted  and broken in places.

“The place would have been a gold mine, if it had been privatised to a  commercial-minded investor,” one visitor said.

Ethiopia may struggle to reach its target of attracting one million tourists  a year within the next decade.

It’s not that the country — labelled the cradle of mankind after the  discovery of ancient human remains — lacks attractions but its infrastructure  is creaking, with poor roads and a lack of hotels. A 1998-2000 border war with  Eritrea also hit tourist earnings.

Nonetheless, the government aims to promote Ethiopia as one of the top 10  tourist destinations in Africa by 2016, hoping to reap $US650 million ($A873.50  million) a year in much-needed foreign receipts.

Like many other potential money-spinners, the crocodile ranch is crying out  for investment to improve facilities and boost earnings.

But most visitors would never come across the Arba Minch crocodile farm,  which generated a paltry $US48,000 ($A64,503) from visitors in 2000 — far below  its overhead expenses.

Some 500km south of the capital Addis Ababa, Arba Minch is studded with  glistening lakes formed from bubbling streams that flow through the tropical  forests on nearby slopes.

The lakes give the town its Amharic name which means “40 springs” in  Ethiopia’s official language.

Estifanos Endeshaw, one of the ranch’s guides, said some 5,000 crocodiles are  fished out of Lakes Chamo and Abaya each year to be reared on the farm.

Scouts from the ranch scour the lakes’ sandy beaches in search of the hidden  nooks where the crocodiles lay their eggs.

Three months after the eggs hatch, the baby crocs are transported back to the  ranch where they spend the next year in a nursery pool. It takes up to 15 years  for a crocodile to develop into a full-bodied reptile.

Some of the crocodiles are killed on the ranch, their skins destined to be  used to make expensive shoes, handbags and belts, mainly for export.

“The crocodiles being reared in the ranch are mostly for tourist attraction,  although those which are old enough are shot for their skins,” Estifanos  said.

This entry was posted on Tuesday, October 9th, 2012 at 11:23 AM and is filed under Africa, Ethiopia, Land of Culture, Nature & Travel. You can follow any responses to this entry through the RSS 2.0 feed. Responses are currently closed, but you can trackback from your own site.