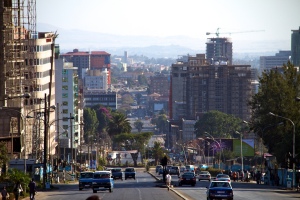 The name of this sprawling capital city means “New Flower.” Founded by Emperor Menelik in 1887 and with a population of about 4 million, Addis Ababa is Africa’s diplomatic capital with the headquarters for the Organization of African Unity located here. Impressive monuments of colonial architecture are scattered among stretches of sun-bleached shacks. Drive through “Mercato” the largest open market on the continent. Make interesting stops that include the National Museum, the Ethnological Museum and the Ba’ata Church known as Menelik Mausoleum. Enjoy souvenir shopping and visits to special art galleries. Yama Ethiopia Tours patronizes local charities providing guests with opportunities to make purchases that support them. Hotel accommodations range from tourist class to luxury collections and a variety of restaurants serve delectable dishes from around the world including, of course, Ethiopia.
Highlights of the most interesting museums and monuments in the capital of Ethiopia are:
The National Museum which is one of the best museums of East Africa with a large collection of archeological excavations, historical objects of Ethiopian art, and important fossils including Lucy, one of the first humans. The Ethnographic Museum has a wonderful exhibition of the culture, houses, cloth, objects and traditions of the many Ethiopian ethnic groups. On the second floor you can see an impressive exhibition of traditional musical instruments and religious art from 13th – 20th century.
The Asni gallery houses works of art from modern Ethiopian artists.
The Churches of Kiddist Maryam (1911), Kidane Mehret (YEAR) and Kiddist Selassie (Holy Trinity, 1933) are within walking distance of each other and they have beautiful wall paintings and Church treasures. They are also of historical value having served as the mausoleums of Emperor Menelik II and Haile Selassie and their wives.
The Giorgis cathedral (1905) is famous for its wall paintings from the famous Ethiopian artist Afewerk Tekle. It also has a fine museum.
In the Entoto Mountains you can enjoy the panoramic view over Addis Abeba, enjoy nature and visit the Entoto Maryam Church which is the oldest Church of Addis Abeba (YEAR), founded by Emperor Menelik II. Next to the Church is the Emperor Menelik and Empress Taitu Memorial Museum.
The national museum also contains some wonderful artifacts dating to the south Arabian period of the so-called pre-Axumite civilization of Tigrai. These include a number of large stone statues of seated female figures, thought to have been fertility symbols of a pre-Judaic religion. It is interesting that the figures have plaited hair identical to the style worn by modern Ethiopians (it has been suggested that the mythological Medusa of Ancient Greece was simply a dreadlocked Ethiopian woman). One almost perfectly preserved statue, thought to be about 2,600 years old and unearthed at a site near Yeha, is seated in a 2m-high stone cask adorned with engravings of ibex. Many of the other statues are headless-probably decapitated by early Christians, who converted many pagan temples to churches. Other items include a sphinx from Yeha, once again emphasizing Axumite links with the classical world, a huge range of artifacts from Axum itself, and a cast of one of the Gragn stones from Tiya.
Continuing straight uphill from Siddist Kilo for perhaps 500m, a left turn through a tall gateway leads into the main campus of the University of Addis Ababa and the excellent Museum and Library of the Institute of Ethiopian Studies. Very different to the National Museum, but no less absorbing, this is an exemplary ethnographic museum, housed on the upper floors of a former palace of Haile Selassie, within the green university grounds immediately north of Siddist Kilo. The first floor of the building is dedicated to a wide array of artifacts and daily objects relating to most ethnic groups in Ethiopia, not only the monotheistic highlanders, but also the fascinating animist cultural groups of South Omo and Afar people of the eastern desserts. On the second floor is a new exhibition on Ethiopian musical instruments and visual art through the ages, an impressive selection of Ethiopian crosses, and a unique collection of icons dating back to the middle Ages. Outside the museum building, look out for the displaced ‘head’ of the largest of the Tiya stele in the gardens. On the ground floor of the building, the IES Library maintains one of the world’s most comprehensive collections of books and photocopied articles about Ethiopia; despite the archaic and occasionally frustrating card indexing system, it is an invaluable resource for anybody undertaking research on any aspect of Ethiopian culture and history.

Mercato is the real commercial hub of Addis, a vast grid of roads lined with stalls, kiosks and small shops, where you can buy just about anything you might want, such as: the latest local cassettes; traditional crosses, clothes and other curios; vegetables, spices and pulses; and custom-made silver and gold jewelry. Prices are generally negotiable.

This entry was posted on Thursday, September 13th, 2012 at 5:50 PM and is filed under Ethiopia, Travel & Money. You can follow any responses to this entry through the RSS 2.0 feed. Responses are currently closed, but you can trackback from your own site.