Yes, Chef by Marcus Samuelsson: Books Worth Your Time 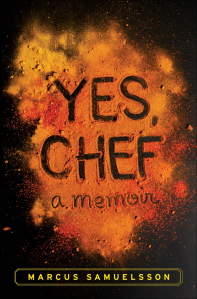 This is a lovely autobiography of one of America’s super chefs, who went from being an Ethiopian orphan, to a Swedish adoptee, to one of the most famous chefs in the US. It traces his life growing up in Sweden, the impact of being black in a predominately white world, and his path to becoming a chef, from cooking school in Sweden through the grueling internships at various restaurants and around the world. He shares his personal joys and struggles, his rise and the life choices he made and regrets, his period as the executive chef of Aquavit-in Minneapolis, and the founding of his new restaurant in Harlem in New York City.

Marcus Samuelsson’s story is inspiring, thought-provoking, and truth seeking. It is an intense but rewarding read, one that examines racial identity, belonging, acceptance, and pursuit of excellence. Portions of the book suffer from dense culinary descriptions that may be inaccessible to readers not so inclined; yet, it is integral to the book’s basis, which begins and ends in the kitchen. A masterpiece! From a child adopted out of Africa-Ethiopia, and growing up in Sweden to one of America’s top chefs, this is the story of the surprising journey Marcus Samuelsson has taken. Chef Marcus Samuelsson has the flavors of many countries in his mind.  There is the Ethiopian spice flavor, used by the birth mother he no longer remembers. There are the herring, pickles, and jams of Sweden, where he grew up with his adopted family, and the roast chicken that was the specialty of his grandmother, who inspired his love of cooking and gave him his first lessons.

The book covers both the good and admirable in his life as well as the parts many of us would prefer to keep under wraps, so it ranges from the strong family that raised him and his strong work ethic. I knew nothing about his life beyond that point and found this memoir to be a fascinating story. He is such a diverse, focused and talented individual. His story of being a famous chef is a true testament to the dedication and extreme hard work that it takes to become an award winning chef. The book was an insightful look into the upscale restaurant world and was written with a no holds barred eloquence. A true story worth your time to read.

I’ve been a Marcus Samuelson fan since his Top Chef Masters appearance, and am always pleased to find him on shows like Chopped, Chopped Champions, and more. I was excited to find he’d written a memoir, and I can honestly say, not one page of this book disappointed me or changed my opinion of him. I’m definitely a fan, and proud of him.

Finally, A James Beard  Award-Winning chef and author of several cookbooks,  Marcus Samuelsson has appeared on Today, Charlie rose, Iron chef, and Top chef masters, where he took first place. In 1995, for his work at Aquavit, Samuelsson becomes the youngest chef ever to receive a three star review from the New York Times. His newest restaurant, Red Rooster, recently opened in Harlem, where he lives with his wife.  He also won the James Beard award, appear on “Top Chef Masters,” and create the Obama’s’ first official state dinner.

This entry was posted on Friday, June 29th, 2012 at 1:05 PM and is filed under Adoption, Africa, Ethiopia, Food, Travel & Cooking. You can follow any responses to this entry through the RSS 2.0 feed. Responses are currently closed, but you can trackback from your own site.