Although an attractive little city in its own right, the main  reason for visiting Bahir Dar is that it is the gateway to Lake Tana and the Blue Niles Falls. The area is distinguished by an extraordinary concentration of monasteries, set round a wetland rich in endemic birds, fish and a pod of hippos. Monasteries, most between 400 and 800 years old, perch on 20 of the lake’s 37 islands, though some are thought to pre-date the arrival of Christianity.

The most accessible monasteries are those on the Zege Peninsula, which is reached by a short boat trip. The 14th century Ura Kidane Mihret is one of the easiest monasteries to reach and, fortuitously, also one of the most beautifully decorated. This fine example, along with the nearby disused churches of Mehal Giyorgis and Bet Maryam, will fit neatly into a half-day trip from Bahir Dar and should satisfy most people’s appetite for the monastic. An added bonus of a visit to the Zege Peninsula is that the conservative monasteries have formed an inadvertent nature reserve – the largest pocket of natural forest in the area, which supports a troop of monkeys and a prolific bird population.

For those who can stay longer, the more remote monasteries dotted around the shore and islands of the lake offer an enticing journey into the religious history of the district. The legend-soaked Tana Chirkos is particularly alluring. It has been suggested that this monastery was the storage place for the Ark of the Covenant for 600 years, until it was moved to Axum. The remains of three hollowed-out columns have been linked to a pre-Christian Judaic shrine, reputedly dating King Solomon’s time. Another story told about the island is that the Virgin Mary and the Holy Family rested on the island during their journey from Egypt to Israel, and that a preserved footprint is that of the young Jesus.

The other notable draw of Bahir Dar is the 45m-high Blue Niles Falls which, at its fullest (after the rainy season, from about June to January, and when not being diverted to generate much-needed electricity), forms one of Africa’s most spectacular waterfalls. Here, the Blue Nile, which contributes 85% of the main Nile flow, starts its long journey to the Mediterranean. In addition to the waterfall itself, the environs are notable for iAgam Dildi, a stone bridge built by the Portuguese in 1620, and the good opportunities for birding in the woodlands nearby.

Tree-lined avenues and sweeping lakefront vistas make Bahir Dar more than just a convenient place to stay. Visitors can move from the lively market, where the classic Ethiopian tussle between modernity and rustic tradition is played out on a daily basis, to historic churches enshrining the town’s heritage as the focal point of the Christian Empire for 400 years. The palace of Haile Selassie at Bizeit is a reminder of the more recent history of Ethiopia.

An added bonus of visiting Bahir Dar is that it has some of the best hotels in the country. It is also the natural starting point for the scenic drive to Gonder, just a 3-hour journey on a paved road and a wonderful opportunity to see the northern Ethiopian highland countryside.  For more information Traveling to Ethiopia Visit www.admastraveltours.com

Getachew Teklu is a travel consultant residing in the Twin Cities area, and can be reached by Email at admastravel@gmail.com 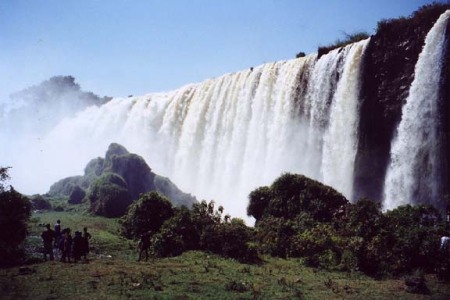 The Nile Falls-Ethiopia where it begins

This entry was posted on Saturday, August 6th, 2011 at 3:14 AM and is filed under Ethiopia, Nature & Travel. You can follow any responses to this entry through the RSS 2.0 feed. You can leave a response, or trackback from your own site.