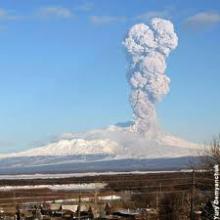 Eritrea’s volcanic ash cloud has disrupted some of neighboring Ethiopia’s flights and has also cut short Hillary Clinton’s Ethiopia trip.  Ethiopian Airlines Enterprise, the Addis Ababa-based airline, said in an e-mailed statement today that routes to northern Ethiopia, neighboring Djibouti and the Sudanese capital of Khartoum have been affected, Bloomberg reports. In turn, the company urged travelers to check the status of their flights before embarking on their journey. Getachew Tesfa, a spokesman for the airline, said by phone today that they are “closely monitoring” the situation. “As things get better we are ready to operate. All other flights are operating,” Tesfa said. Philippe Husson is a manager at the Volcanic Ash Advisory Center in Toulouse, France. He said in a phone interview that Eritrea’s Nabro volcano erupted on June 12, spewing an ash cloud about 13.5 kilometers (8.4 miles) into the atmosphere, Bloomberg reports After initially projecting volcanic ash for about 36 hours, the volcano is now producing sulphur dioxide and water, he said.

According to the website of Deutsche Lufthansa AG, flights from Frankfurt, Germany to Bole International Airport in Addis Ababa have been cancelled. Husson said, “The eruption is ongoing in terms of gases and water, but there is no more volcanic ash, which is a hazard for aviation.” No records exist of Nabro erupting before, according to Atalay Ayele, associate geophysics professor at Addis Ababa University. “Nobody knows if it has erupted” previously, he said in a phone interview. Atalay said the nearby Dubbi volcano last erupted in 1861, reports Bloomberg. The eruption cut short a two-day visit to Ethiopia by U.S. Secretary of State Hillary Clinton, who left the Horn of Africa yesterday. The State Department said in an e-mail that Clinton departed prematurely “to avoid being unable to travel for an indeterminate period of time.”

Eritrea, a nation of about 6 million people, is roughly the size of the U.S. state of Pennsylvania. The long dormant Eritrean volcano has spewed ash up to about 13km (eight miles) into the air. The eruption is believed to have followed a string of earthquakes in the region, BBC reports. It is not yet known when the volcanic activity

This entry was posted on Tuesday, June 14th, 2011 at 6:26 PM and is filed under Airlines, Nature & Travel. You can follow any responses to this entry through the RSS 2.0 feed. You can leave a response, or trackback from your own site.