Ethiopian Airlines, one of Africa’s largest and fastest growing carriers, is increasing its number of flights from Washington D.C. with the launch of daily passenger flight between Washington Dulles and Addis Ababa, Ethiopia, commencing this June 2010.

Morning departures will be available 10:05 a.m. every Monday, Tuesday, Thursday and Friday from Washington Dulles with 8:05 p.m. evening departures on Wednesday, Saturday and Sunday.  The airline will offer 10:15 p.m. nightly service from Addis Ababa to Washington.

The Washington, D.C. hub currently offers four weekly departures on Ethiopian Airlines to Addis Ababa. From there, passengers can connect to 35 African destinations – more than any other airline.

Those planning to travel by air to or from this destination should check with their airline or travel agent immediately to reconfirm travel arrangements. If your flight has been canceled, request the next available flight. Traffic on roadways leading to airports may be considerably slower than normal. Airports are likely to become very crowded, and lines will be long. Allow a good measure of extra time to get to the airport, check in and go through security.

Before driving in harsh winter conditions, make sure that your car is in good working order. Dress warmly and take along preventive supplies, such as a flashlight, windshield scraper, snow shovel and an abrasive material, such as sand, that you can use for traction if get you stuck. Most importantly, slow down, steer smoothly and leave a good measure of extra space between your vehicle and those around you. Shift to low gear when driving downhill. Watch for ice on bridges and overpasses. If your car goes into a skid, don’t brake, but ease off the accelerator and steer smoothly in the direction you want to go.

Those planning to travel by train or subway in this region should check with the railway immediately to reconfirm travel arrangements. If your train has been canceled, request a reservation on the next available train. Traffic on roadways near the train station may be considerably more congested than normal. Stations are likely to become very crowded, lines will be long and tempers among other passengers may be short. Allow a good measure of extra time to get to the station and check in.

Airlines  including American, Delta, Southwest and United canceled more than 1,400 flights from Chicago as a snowstorm that slammed the U.S. Midwest during the weekend moves toward Canada.

The storm, which dumped as much as 21.5 inches (55 centimeters) of snow in Minnesota, caused the roof of Minneapolis’s Metrodome to collapse. The National Football League game between the Minnesota Vikings and the New York Giants was moved to Ford Field in Detroit today. Wind and rain caused flight cancellations from Boston to Washington.

“This winter storm is obviously causing havoc with air travel through the upper Midwest,” Mary Frances Fagan, a spokeswoman for AMR Corp., operator of American, said in a telephone interview from Chicago. “Hundreds of flights have to be canceled for safety reasons.”

As many as 2.3 million people a day may fly on U.S. airlines from Dec. 16 through Jan. 5 as demand rises 3.1 percent this holiday season compared with last year, the Air Transport Association forecast Dec. 8. Planes may be 90 percent full on average for the busiest days, the Washington-based industry group said in a statement.

At least 272 of Fort Worth, Texas-based AMR’s American Airlines, American Eagle and AmericanConnection flights were canceled out of Chicago, according to Fagan.

Allure of the Seas Cruise Ship 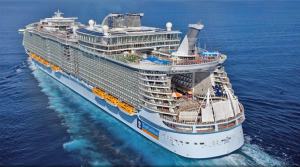 Allure of the Seas and sister-ship Oasis of the Seas, Royal Caribbean International’s Oasis class ships, will be the world’s two largest and most revolutionary cruise ships at sea. Royal Caribbean Allure of the Seas, the second of the two biggest ships ever constructed, will debut starting December 2010 with seven-night sailings to Eastern and Western Caribbean from her home port of Port Everglades in Fort Lauderdale, Florida. Revolutionizing Royal Caribbean cruises once again, Allure of the Seas will be packed with amazing new activities and experiences on this 220,000 gross ton ship offering 16 decks and accommodating 5,400 passengers at double occupancy. Allure of the Seas, like her sister ship, boasts seven distinctly themed neighborhoods including a replica of New York City’s Central Park – a lush garden and public area full of beautiful foliage and fine restaurants.

Allure of the Seas will present guests with many innovative features at sea including Royal Caribbean’s exclusive and first-ever onboard entertainment from DreamWorks Animation, a zip line, a full-size carousel, and AquaTheater amphitheater. In addition to these revolutionary features, this Royal Caribbean cruise ship will also provide popular features offered on other Royal Caribbean cruises such as FlowRider® surf parks, an H20 Zone water park, an adult-only Solarium, and much more. Allure of the Seas will also pamper guests offering 28 ultra-modern loft suites with two-story ocean views, offering an unforgettable experience.

The largest game reserve in South Africa, the Kruger National Park is larger than Israel. Nearly 2 million hectares of land that stretch for 352 kilometers (20 000 square kilometers) from north to south along the Mozambique border, is given over to an almost indescribable wildlife experience. Certainly it ranks with the best in Africa and is the flagship of the country’s national parks – rated as the ultimate safari experience. The Kruger National Park lies across the provinces of Mpumalanga and Limpopo in the north of South Africa, just south of Zimbabwe and west of Mozambique. It now forms part of the Great Limpopo Transfrontier Park – a peace park that links Kruger National Park with game parks in Zimbabwe and Mozambique, and fences are already coming down to allow game to freely roam in much the way it would have in the time before man’s intervention. When complete, the Greater Limpopo Transfrontier Park will extend across 35 000 square kilometers, 58% of it South African, 24% Mozambican and 18% Zimbabwean territory.

The Kruger Park is a self-drive destination, although there are guided tour operators, with an excellent infrastructure that includes picnic sites, rest camps, waterholes and hides. The Kruger Park is a remarkable reserve offering an incredible experience of Africa at its most wild.

Ethiopia features some of the highest and most stunning places on the African continent, such as the jaggedly carved Simien Mountains, and some of the lowest, such as the sulphur fumaroles and lunar-like landscape of the Danakil Depression. It is also one of Africa’s greatest cultural destinations, with no fewer than eight UNESCO World Heritage sites, including the mystical rock-hewn churches of Lalibela.

Ethiopia is the only country in Africa never to have been fully colonized (with the exception of a five-year occupation by Mussolini’s Italy) and so retains a unique culture, has its own script and language (Amharic) and maintains a strong sense of national identity. Years of totalitarian abuse at the hands of the Derg socialist military regime (1974-1991), drought, famine and continuing border disputes with Eritrea have taken their toll, but Ethiopia survives as an ancient and fascinating destination.

Geography
Ethiopia is situated in northeast Africa, bordered by Eritrea, Sudan, Kenya, Somalia and Djibouti. It is about twice the size of France. The central area is a vast highland region of volcanic rock forming a watered, temperate zone surrounded by hot, arid, inhospitable desert. The Great Rift Valley, which starts in Palestine, runs down the Red Sea and diagonally southwest through Ethiopia, Kenya and Malawi. The escarpments on either side of the country are steepest in the north where the terrain is very rugged. To the south, the landscape is generally flatter and more suited to agriculture.